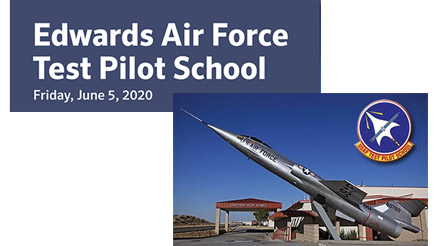 The U.S. Air Force Test Pilot School (USAF TPS) is the Air Force’s advanced flight training school that trains experimental test pilots, flight test engineers, and flight test navigators to carry out tests and evaluations of new aerospace weapon systems and also other aircraft of the U.S. Air Force. This school was established on September 9, 1944 as the Flight Test Training Unit at Wright-Patterson Air Force Base in Dayton, Ohio. To take advantage of the un-congested skies, usually superb flying weather, and the lack of developed zones in the event of crashing, the test pilot school was officially moved to its present location at Edwards Air Force Base in the Mojave Desert on February 4, 1951.

Thirty-seven TPS graduates have been selected for the U.S. space program, and 26 earned astronaut wings by flying in the X-15, Gemini, Apollo, and Space Shuttle programs.

This event is limited to 50 people and includes an Italian buffet lunch. $40 per person.