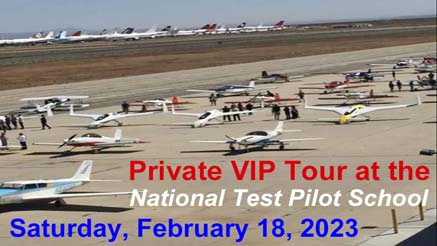 Our members will be given a private VIP Tour of the school conducted by a legendary test pilot.

At the same time we will enjoy the "Plane Crazy" Air Show with an amazing array of vintage and experimental airplanes!

Our morning will begin at Panera in Santa Clarita where coffee and pastries will be provided. Then we will hop on the freeway for a 65 mile (59 minutes) drive to the Mojave Air and Space Port.

Lunch options available after the event.

Cost is $20 per person to cover refreshments and club expenses.

Note: This event was originally scheduled for June 2021 but was cancelled. Anyone that signed up for the original date and did not request a refund may attend at no charge.